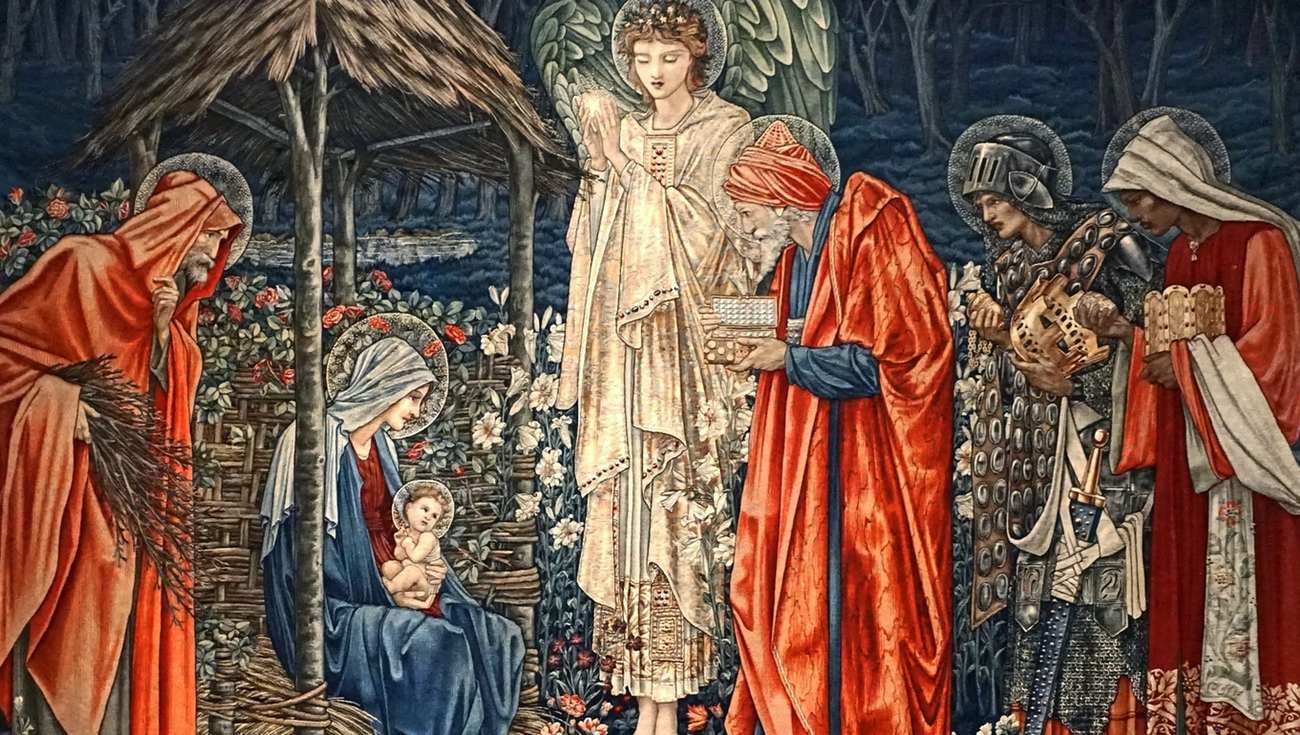 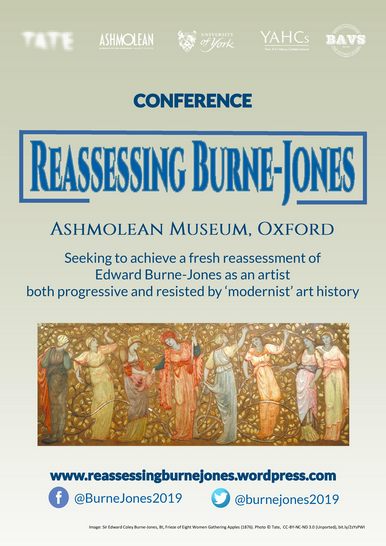 Reassessing Burne-Jones was a two-day international conference held at the Ashmolean Museum, Oxford, from Thursday 21 to Friday 22 February 2019.  It was organised by the Department of History of Art at the University of York in collaboration with Tate Britain and the Ashmolean, to coincide with the Tate Britain exhibition Edward Burne-Jones (24 October 2018 – 24 February 2019).  The keynote speakers were Dr Fiona Mann (Oxford Brookes University) and Dr Stacey Sell (National Gallery of Art, Washington).  As well as an international array of curators and academics, the speakers included a significant number of doctoral students from the University of York. The conference was convened by History of Art PhD students Katherine Hinzman (University of York), Robert Wilkes (Oxford-Brookes University) and Alexandra Gushurst-Moore (University of York), with assistance from Dr Marjorie Coughlan (YAHCs, University of York).

The conference sought a fresh reassessment of Edward Burne-Jones (1833-1898) as an artist at the forefront of a pivotal transition, both progressive and also resisted by ‘modernist’ art history. Burne-Jones’s complex use of tradition, which itself sought to challenge established artistic practices, is perhaps one reason he has been underappreciated, even as the Pre-Raphaelites have risen in popularity as the British nineteenth-century equivalent to the rebellious French avant-garde.

'Reassessing Burne-Jones' explored new facets of Burne-Jones’s vast and varied œuvre, with a range of papers that reflected the artist’s own innumerable interests. 'His paintings and decorative designs hang in galleries and churches throughout England and the world; this conference, in tandem with this major exhibition of his work at the Tate, anticipates renewed and energised international scholarship on the artist and his multitudinous connections, collaborations, and influences in the society, culture and art of the nineteenth century' (conference introduction).

Reassessing Burne-Jones was supported by a grant from the British Association for Victorian Studies (BAVS).

See below for the list of speakers and their papers; for full details of the conference, including abstracts of all the papers, see the Reassessing Burne-Jones conference website.

Glenda Youde (University of York): ‘Burne-Jones and the Rossetti Influence: But Which Rossetti?’

Polina Tokmacheva (Pushkin Museum of Fine Arts, Moscow): ‘The Art of E.C. Burne-Jones in the Context of Anglo-Italian Dialogue of Cultures’

Katherine Hinzman (University of York): ‘“Things that will never be out of me”: Burne-Jones, John Henry Newman and a Theology of Art’

Colin Cruise (Aberystwyth University): ‘On the Aesthetics of Skin: Burne-Jones and Vellum’

Rachel Scott (Tate) – Paper prepared in collaboration with Joyce Townsend and Alastair Johnson (Tate): ‘The Making of a Triptych: The Annunciation and the Adoration of the Magi by Burne-Jones, 1861’

'Burne-Jones’s works in oil have been little studied on a technical level. This paper will look at the way he explored the medium in the early years of his career, challenging conventions from the start. It will examine the techniques and materials he used and the diverse influences which inspired him to paint in oil for interiors from domestic to ecclesiastical.'

Charlotte Hone (University of York): ‘Angel Wings: The Protest of Sir Edward Burne-Jones in Favour of the Soul’s Immortality’

Ciarán Rua O’Neill (University of York): ‘It ‘Will Be in Rome and Will Last for Ever’: Edward Burne-Jones, Architecture, and St. Paul’s Within-the-Walls’

Elisa Korb (Misericordia University, Pennsylvania): ‘The “Pollution and Purification” of Edward Burne-Jones’s Classical Heroines’ (Paper was presented via a recording)

'In comparison to many of the categories of decorative arts that held such an important place in Burne-Jones’s work, his designs for tombs and memorials have attracted relatively little attention. This paper focuses mainly on two tombs the artist designed for the family of his close friend, Elizabeth Lewis.' 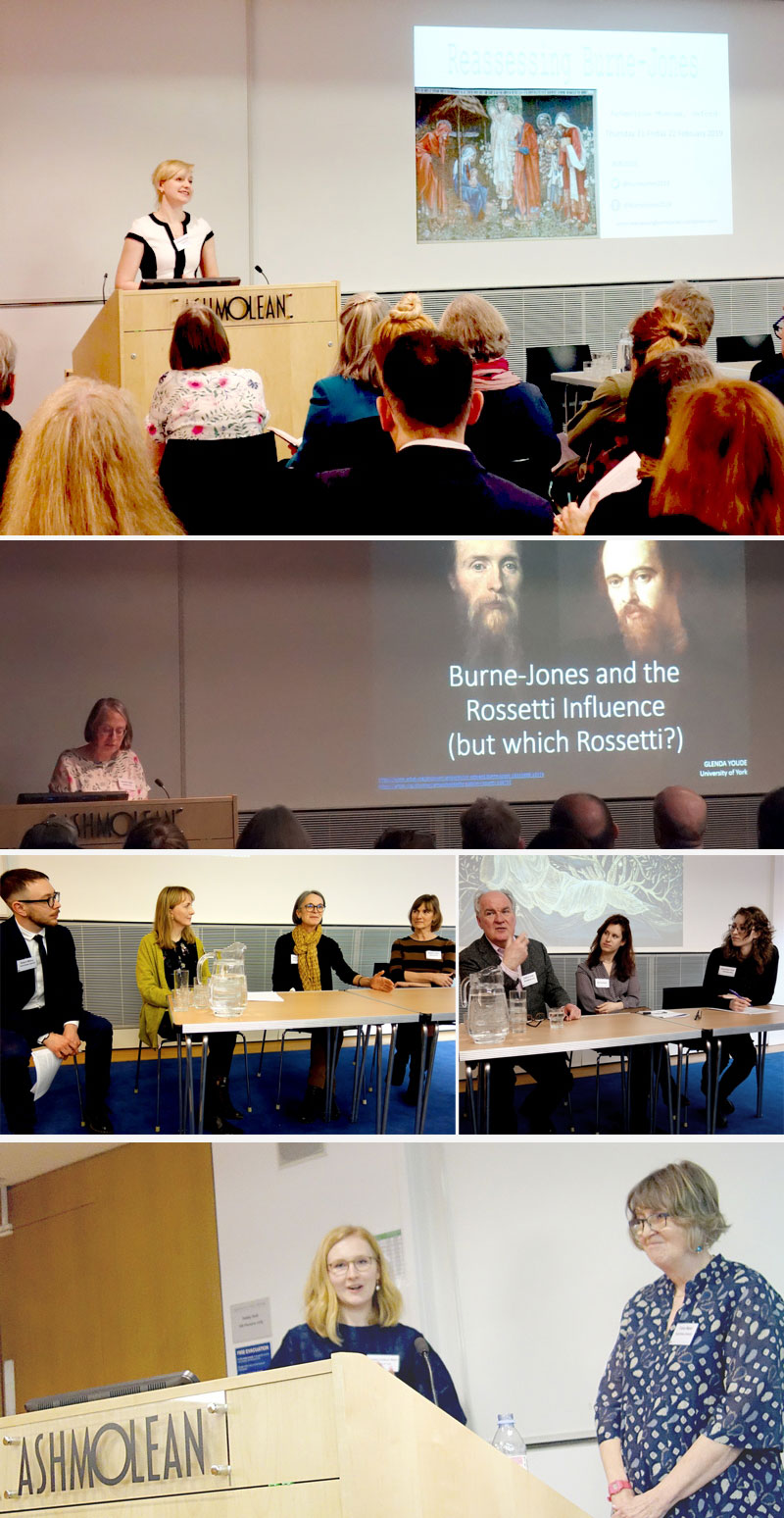 Day 1 of the conference

Day 2 of the conference

Read about our partnership with Ashmolean Museum