'Making a Masterpiece: Bouts and Beyond' Exhibition Essay by Adele Carraro

Adele Carraro is a third-year student at the University of York, studying for a BA (Hons) in Curating and Art History. This essay grew out of her involvement, as part of her second year, in the York Art Gallery exhibition Making a Masterpiece: Bouts and Beyond. The exhibition, which runs from 11 October 2019 - 26 January 2020, was curated by Dr Jeanne Nuechterlein (University of York), with Dr Beatrice Bertram and Jenny Alexander (York Art Gallery).

Read more about the exhibition, including an introduction by Dr Nuechterlein, and another essay, by student Yindi Chen.

This essay will demonstrate the significant role of natural symbols contained in 17th- and 18th-century still life paintings and the legacy left by them to the modern day. Examining some examples drawn from the exhibition Making a Masterpiece: Bouts and Beyond, the essay will focus on the power of nature in expressing truthful messages. In Holland’s ever-growing intellectual milieu, the paintings conveyed a range of wider meanings, fuelled with humanist beliefs.[1] Coated by a naturalistic veil, the eloquence peculiar to nature and its potential for symbolism reveals itself when paintings are seen from a Dutch Golden Age perspective.[2] The strength of significance incorporated in those canvasses gave expression to abstract principles still perceivable in modernity.

First of all, it is important to consider the reasons behind the expansion of the genre of still life. The influence of humanism pervaded art under the form of realism, as a consequence of empirical investigation taking over theoretical studies.[3] Hence, the appearance of natural objects painted in rich detail reflected the meticulous studies of nature conducted in parallel by scientists.[4] For instance, Jan Van Os’s Still Life (Figure 1) features a wide variety of floral specimens melodiously arranged together. However, the tendency to create a sharp delineation of each item forming the arrangement results in an overtly exaggerated realism, which is, in its essence, not fully real.[5] 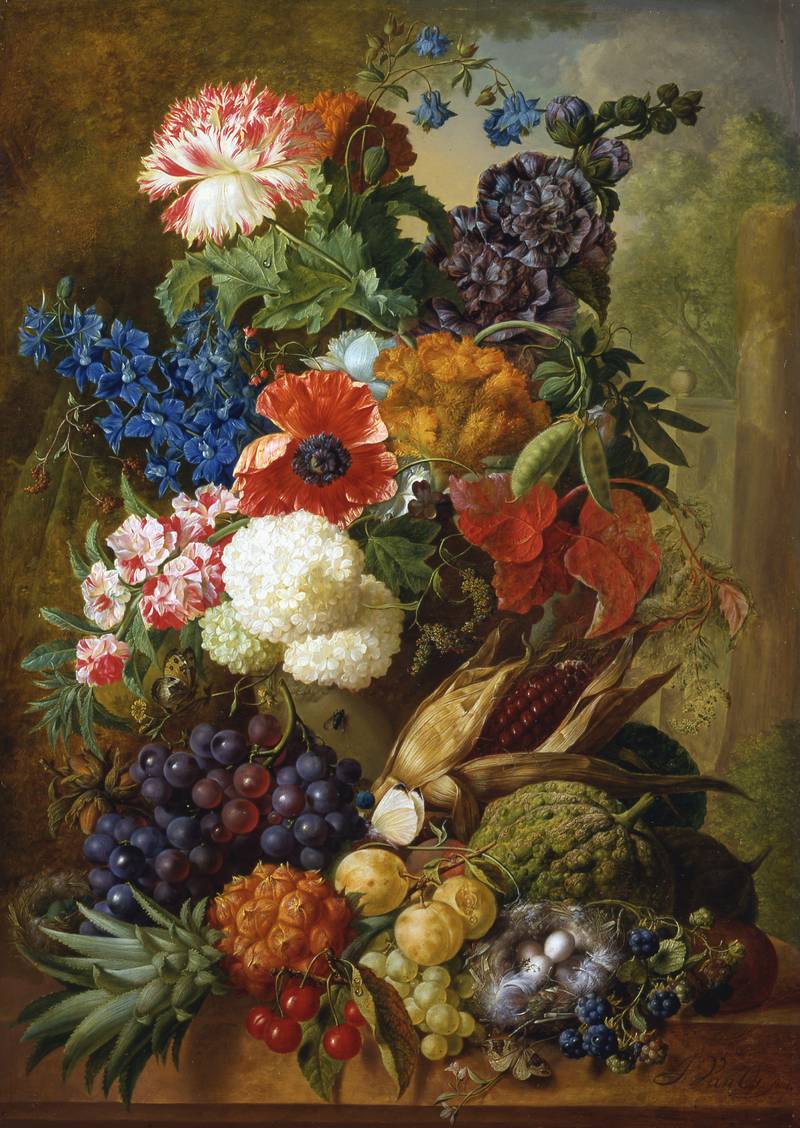 This punctilious detail makes the objects appear almost to pertain to a utopian world – rich in products impossibly grown together or blooming simultaneously. Nevertheless, they are seamlessly joined in the same vase, impersonating the commercial flourishing of the country, as opposed to merely being components of a naturalistic painting, as Julie Berger Hochstrasser argues for Dutch still life paintings more generally.[6] Unlikely to be all indigenous, each object epitomises its provenance, while reflecting the effect of Dutch trade expansion. A clear example of this lies in the presence of the pineapple in the bottom foreground of the composition. Unusual in the Netherlands, the fruit works as a marker of the Dutch conquest of the exotic.[7] In fact, compared to other still lifes painted in the early 17th century, later works contain a higher number of imported products.[8]

Thus, the advent of humanism and the desire for knowledge, paired with geopolitical expansion, made the genre of Still Life with its profound meanings remarkably popular. In the 17th-century Dutch economy, flowers, in particular, played a key role, by becoming rare cultivars craved for by investors, then painted by specialist artists. These creative bouquets pertained more to the sphere of illusion than to the one of transcription, since they created something impossibly found in nature and, therefore, based on artifice. [9] Painters do not transcribe the natural world, yet they aspire to document important changes by exploiting the apparent truthfulness of natural detail. 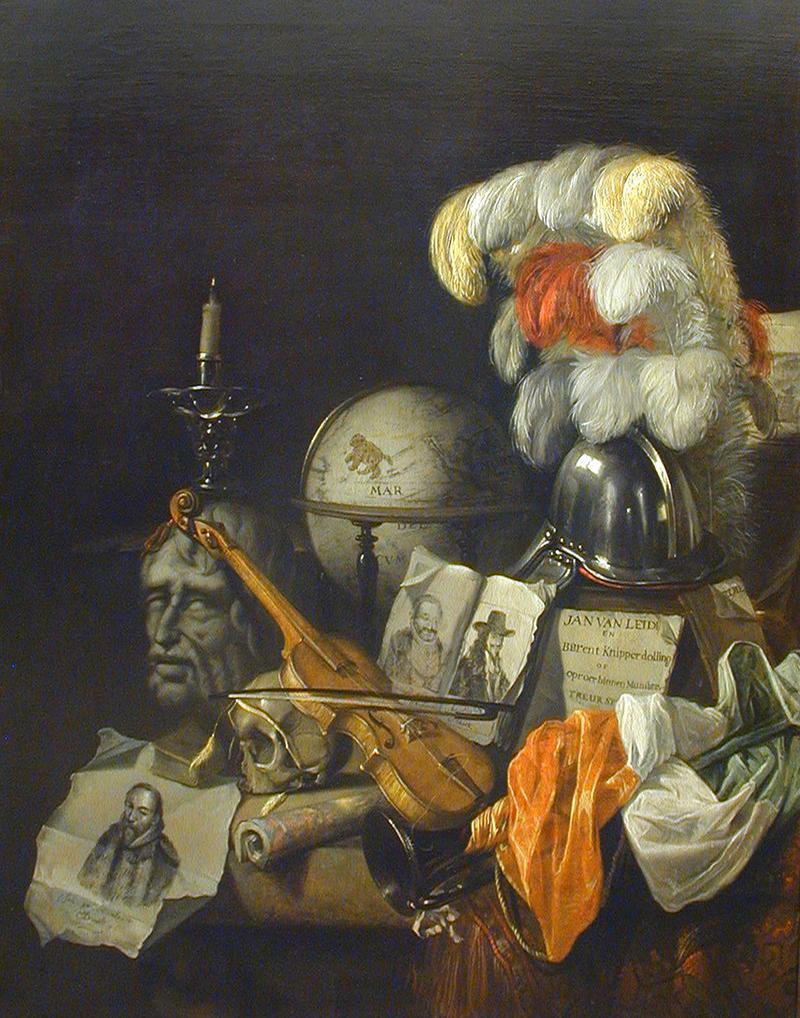 Although flowers transmitted opulence and wealth, they also served as reminders of the transience of life. The meaning contained in the flower is indeed double and contrasting: splendour on the one hand, extinction on the other.[10] Therefore, they should be understood as tangible metaphors of abstract concepts.[11] In addition, the strange combination of very different natural objects alienates the painting itself and renders it a bearer of a deeper meaning.[12] After all, outside of paintings, nature holds the same ontological feature as human beings: mortality.[13] This theme of the brevity of life is expressed in a more direct way in Vanitas paintings, a subgenre of still life.[14] In a painting such as the Vanitas by Jan van Streek (Figure 2), there appear valuable pieces which typify the lifestyle enjoyed by the Dutch at the time. In contrast with the positive expression of globalisation and wealth suggested by the globe and the musical instruments, Vanitas paintings simultaneously warn of the ephemerality of life and the consequent nothingness of these objects.[15] In Jan Davidsz. de Heem’s Memento Mori (Figure 3), the skull and the hourglass unmistakably recall mortality, while the short-lived bright flowers provide a further reminder.[16] Like other still life painters, the artist is able to create a balanced contrast between dark and light hues, by placing emphasis on the flower emerging from the surrounding darkness.[17] Thus, these paintings aim to convey a moral exhortation to conduct a temperate life on earth. 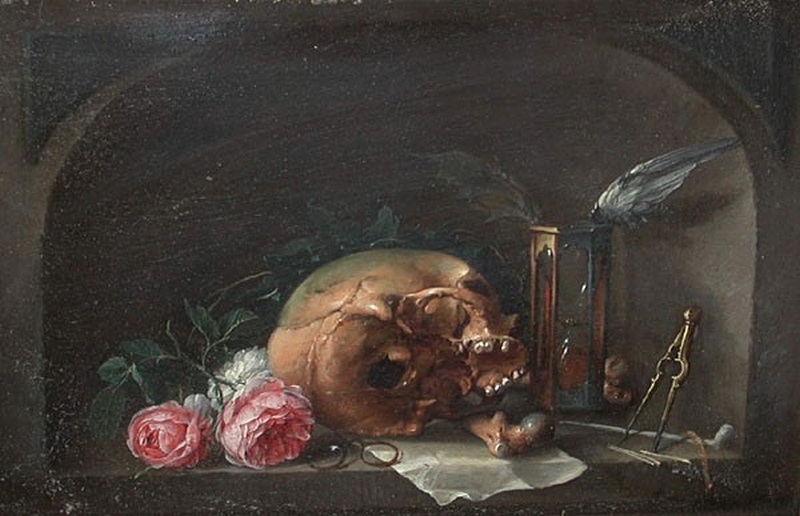 The Dutch passion for still life paintings ultimately derives from the tradition of cultivating and gardening, which would infuse the positivity of rustic life in the quotidian one. This concept, which built upon Horatian ideals of contented human beings working in harmony with nature,[18] leaves a rich heritage to modernity. The theme of nature’s power has been developed by the artist Richard Eurich, portrayed in a painting shown in another part of the exhibition, The Painter Richard Eurich in His Studio (1988) by Leonard Rosoman. Depicted by Leonard Rosoman in his studio, Eurich appears immersed in a space which vividly reminds the viewer of a greenhouse, rather than a traditional art studio.[19] Eurich himself mostly painted nature in a visionary style, focussing on the structure of its components rather than on the overall setting, while rejecting innovative forms of art.[20] His appreciation of nature is apparent in his painting The Critics (1956). Discarded and abandoned, a Cézanne-style fruit basket lies on the side table ignored by the critics, who instead focus on a mostly-blank abstract canvas, while Eurich himself converses with a nude model in the background.[21] This painting illustrates how still life paintings created such a recognisable category often used by later artists, here as a highly iconic symbol referring to nature.

Eurich’s critics turn their backs on the simplicity of nature in order to judge the black and white canvas. Interestingly, the two items are placed as physically opposed and figuratively antithetical. As a consequence, the fruit basket and the canvas represent nature vs. modern art in general. The scene thus focusses on the antithesis between two different schools of thought – naturalism and modernism. The caricature highlights the neglect of nature against the obscurity of a modern art piece which requires a sophisticated interpretation. In so doing, Eurich subtly illustrated his enthusiasm for nature and his rejection of alternative artistic expressions.[22]

This essay has pinpointed the complex articulations that nature is able to express in art despite its apparent modesty. The authority assumed by nature and its representations led to a high level of symbolic recognition, starting in the 17th century. Acting as a fundamental cohesive social agent, still life paintings forged a distinct documentation of cultural and economic advancement. By combining various pictorial devices, the hyperrealism contained in these paintings conferred them with the power of visually expressing social and moral concepts. The two main features of Stilleven, its apparent truthfulness and its capacity to act as a socio-economic documentation, fully emerge in The Critics painted by Eurich. The painter encapsulates the whole world of nature, as understood by the Dutch, in a single bowl of fruit. 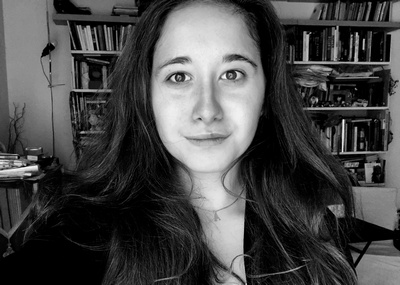