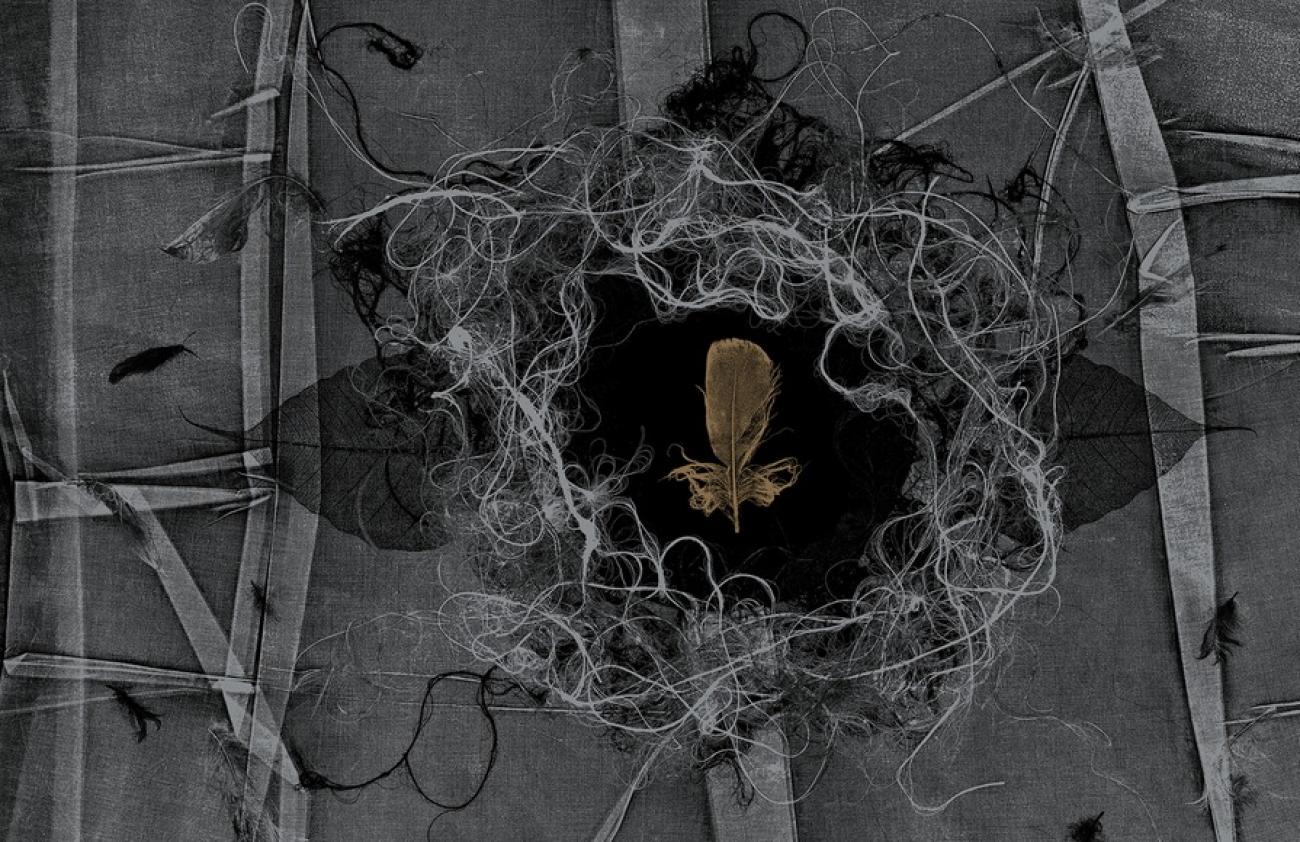 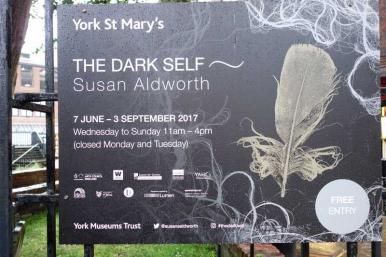 The Dark Self was a major exhibition by artist Susan Aldworth exploring the experience of sleep; it ran from 7 June - 3 September 2017 at York St Mary's (York Museums Trust). Working on location in a medical or scientific academic department is central to Aldworth's practice, and the exhibition marked the culmination of three years as the Wellcome Artist in Residence at the University of York.

A highly original and experimental artist, known for her unorthodox printing techniques and philosophical investigations into the human brain and identity, Aldworth challenged us in this exhibition to reflect upon our nightly transitions from consciousness to oblivion. The Dark Self featured prints, installation, moving image and sculptures, all exploring the mystery of what happens to the 'self' during deep sleep. The film installation Dormez-Vous? was a collaboration with composer Barney Quinton, who created the generative soundtrack from brainwaves during sleep.

Another important aspect of the exhibition was an installation entitled 1001 Nights incorporating 1,001 embroidered pillowcases, each representing ideas of sleep and dreams. It was the result of a nation-wide community project led by Susan Aldworth and involving 414 embroiders of all ages and levels of experience: 'members of the public, local and national craft groups, textile artists, prisoners, Skills for Independent Living course, WEA, Durham, the Royal School of Needlework, students of all ages, the Embroiderers' Guild and the Quilters' Club [...] more than 35,000 hours of hand-stitching' (installation label).

During her three years at the University of York, Aldworth collaborated with Professors Michael White (History of Art) and Miles Whittington (Chair of Neuroscience at the Hull York Medical School (HYMS)), who both spoke at the exhibition opening event (see photos from the opening).  The exhibition was put together with curatorial assistance from University of York students from the History of Art Department and the University's Norman Rea Gallery.

As well as the main exhibition itself at York St Mary's, an exhibition of experimental monoprints produced by Susan Aldworth in preparation for The Dark Self was shown as The Art of Sleep at the Lotte Inch Gallery, York (21 June – 21 July 2017, free entry).

The exhibition was supported and sponsored by: York Art Gallery, an Arts Council National Lottery Project grant, the Wellcome Trust, the Centre for Chronic Diseases and Disorders (University of York), the Hull York Medical School, the York Festival of Ideas, Lotte Inch Gallery, Lumen, Bates of London (who provided all the pillow cases), and Viking Loom, as well as YAHCs and the Department of History of Art (University of York).

Other events were: 'Artist's Talk: The Dark Self', a guided walk around the exhibition as part of the York Festival of Ideas; 'Exploring the Dark Self', a York Festival of Ideas event that included a Discussion, with Susan Holdsworth, Professor Michael White and Professor Miles Whittington; and an 'Embroiderers Day' for the 414 participants in the collaborative '1001 Nights' installation.

A publication was also produced to accompany the exhibition, featuring an essay written by Professor Michael White (University of York).

Architect Will Atkins, who assisted with the exhibition design, wrote about his experience, in particular with the installation of 1,001 Nights.

View photographs from the exhibition opening on 6 June.

The Dark Self was previewed and reviewed in the York Press and was selected as the 2017 Exhibition of the Year by Charles Hutchinson, Arts editor, York Press.

Following the exhibition, Susan Aldworth was a Finalist in the York Culture Awards 2017 in the Best Visual Artist category.

Some artists who took part in the 1,001 Nights project wrote about their involvement: Hippy Stitch, Lyn Dale Fine Art, Pretty Good Things, Ray Reynolds, the Mount School - as well as via the Dark Self Facebook page. 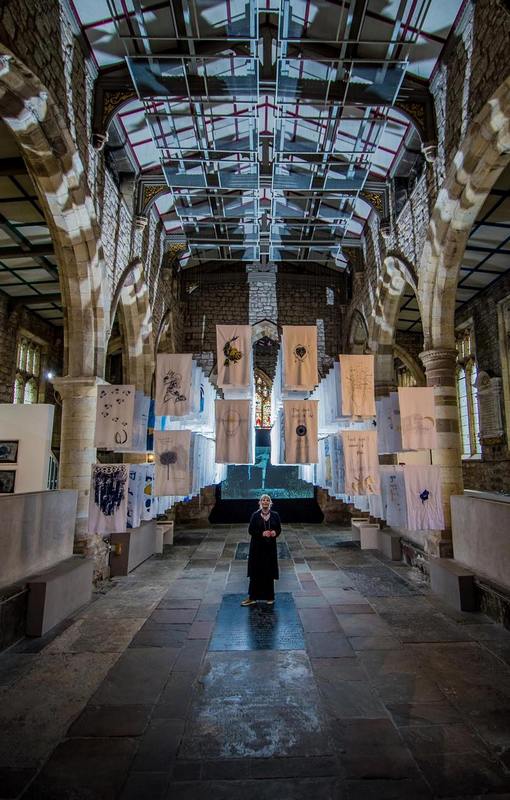 Artist Susan with the installation '1001 Nights' 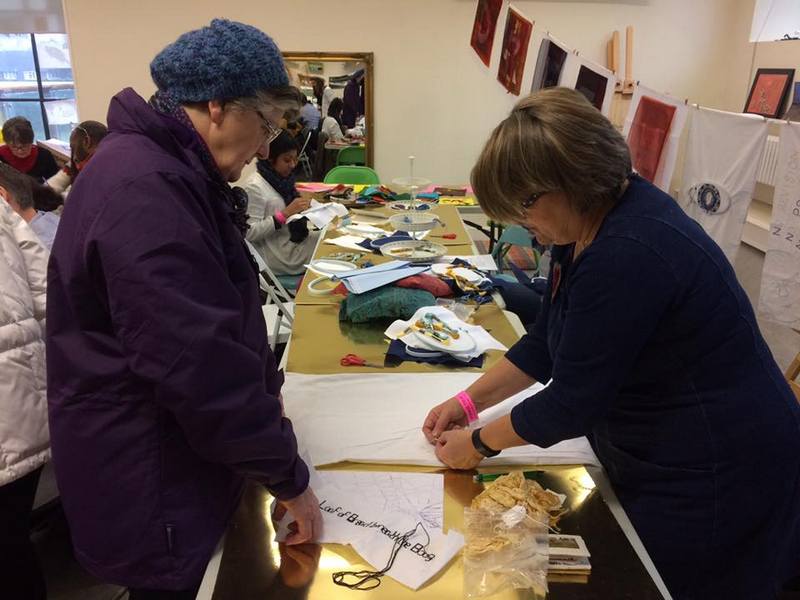 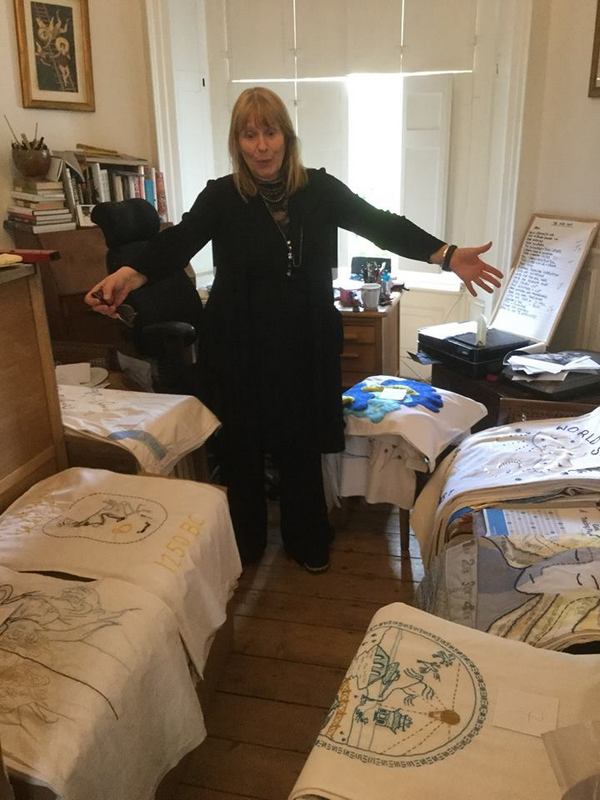 Susan Aldworth with pillowcases for the '1001 Nights' installation 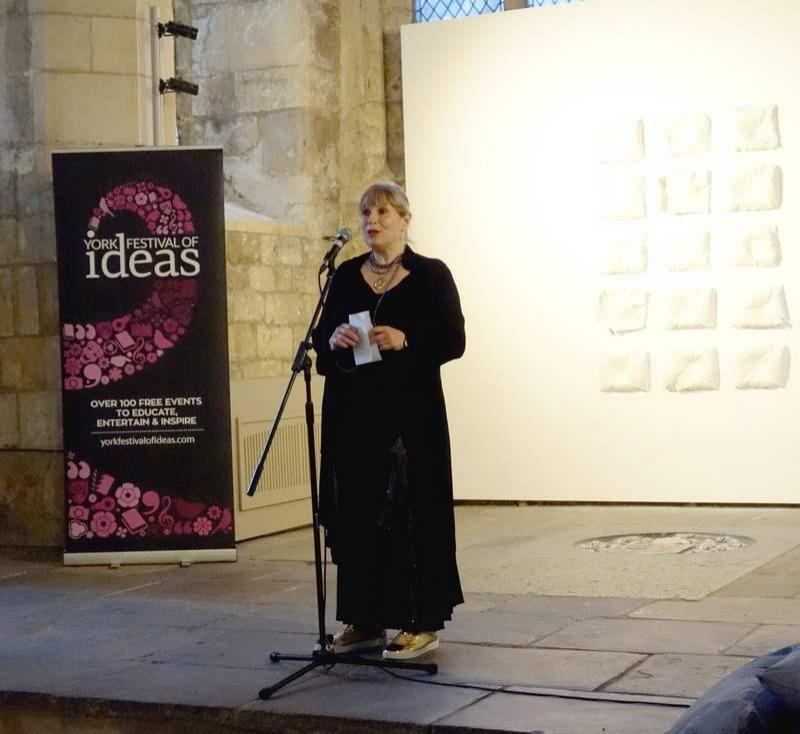 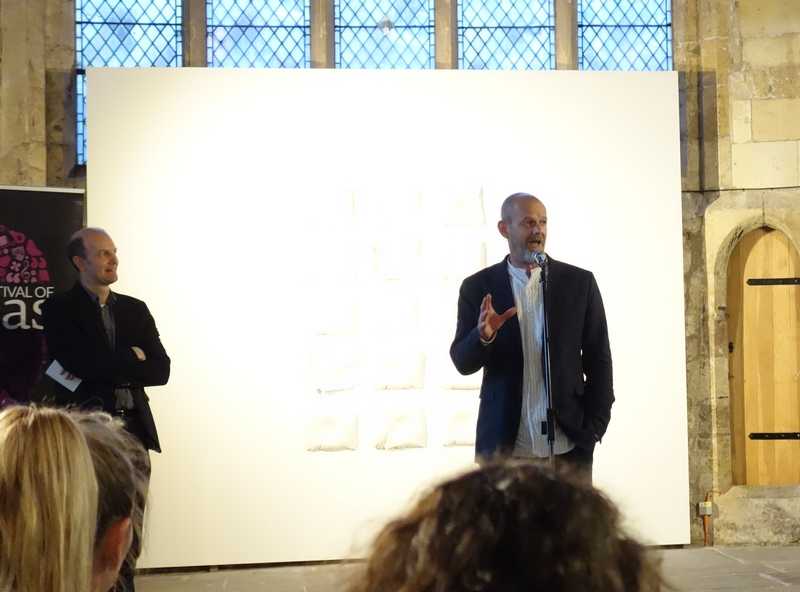 Mark Whittington speaking at the opening 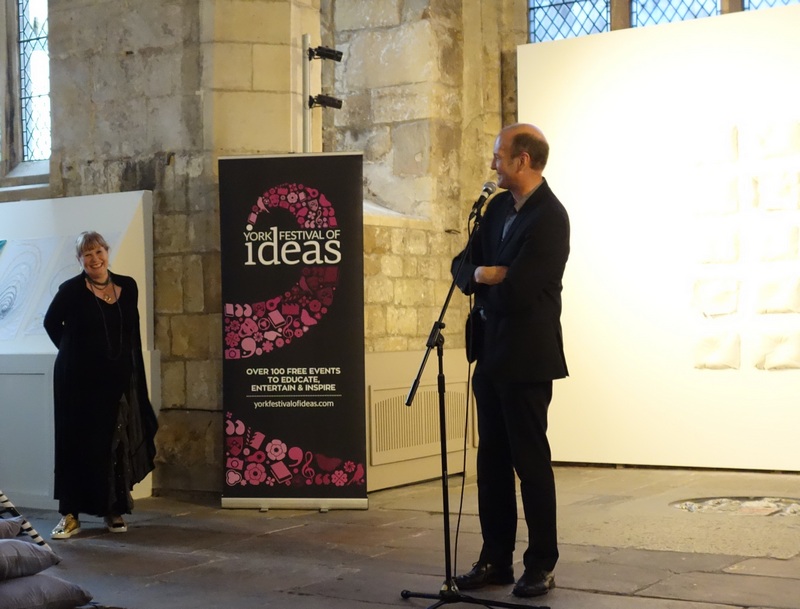 Michael White speaking at the opening 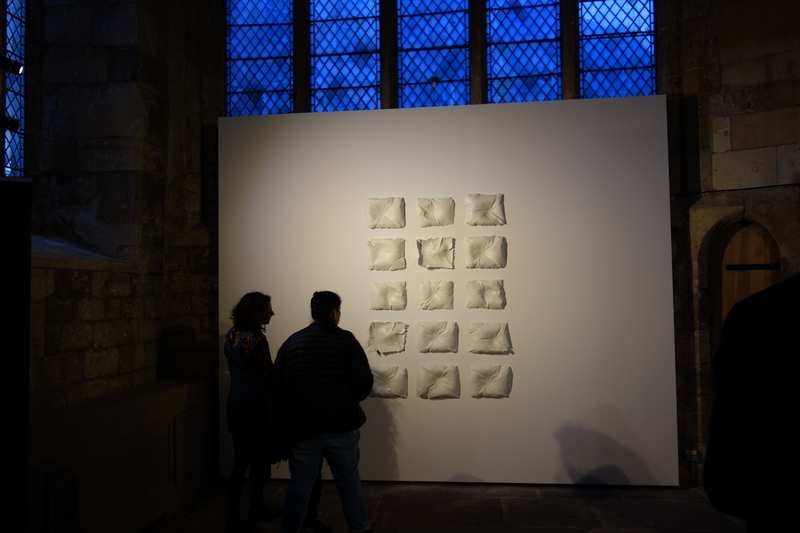 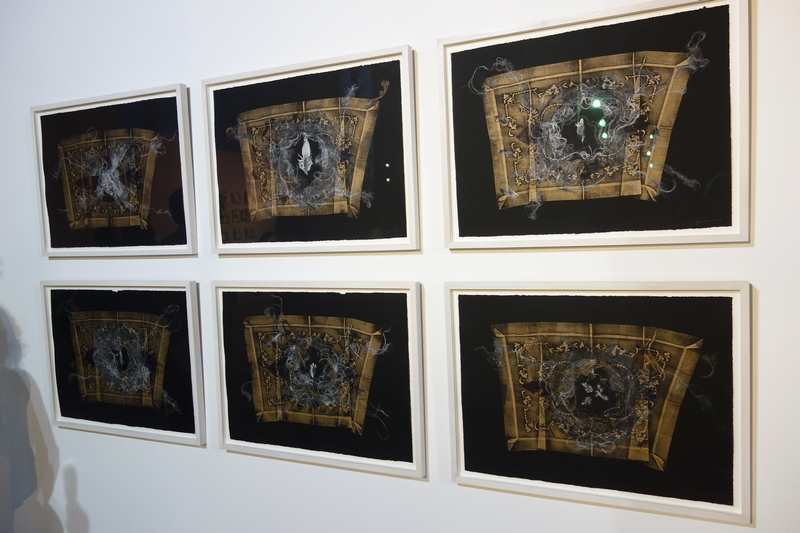 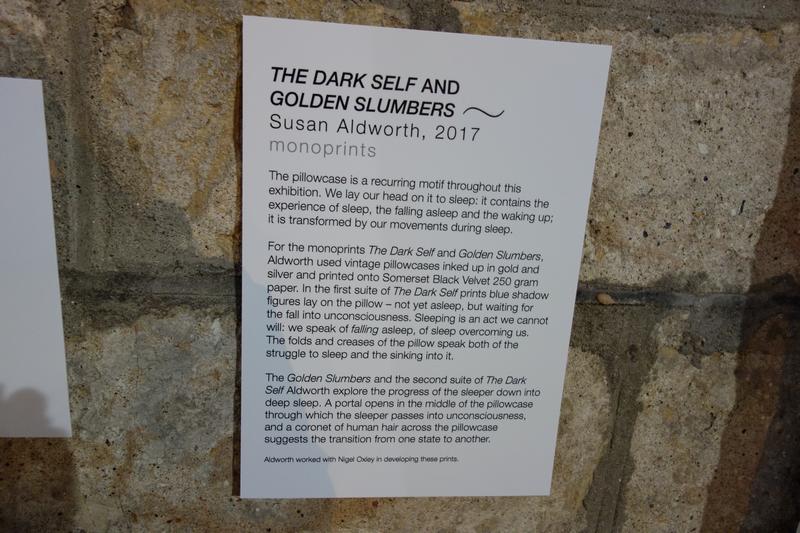 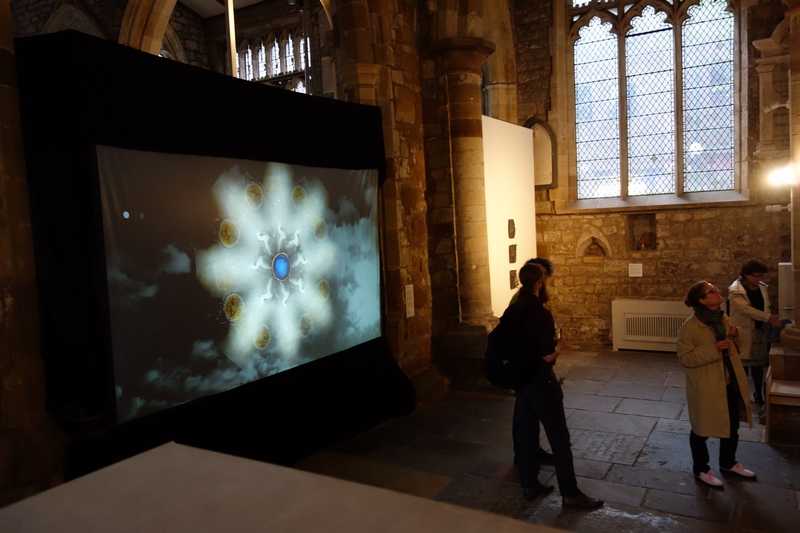 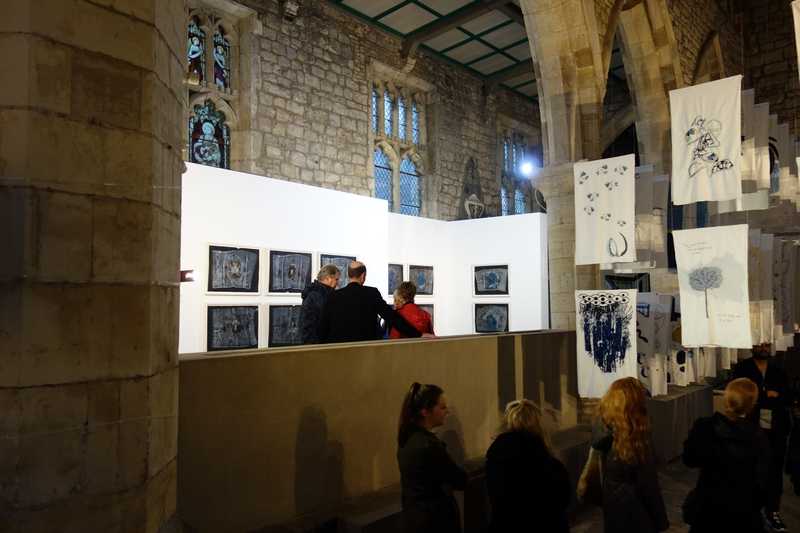 'The Dark Self' opening 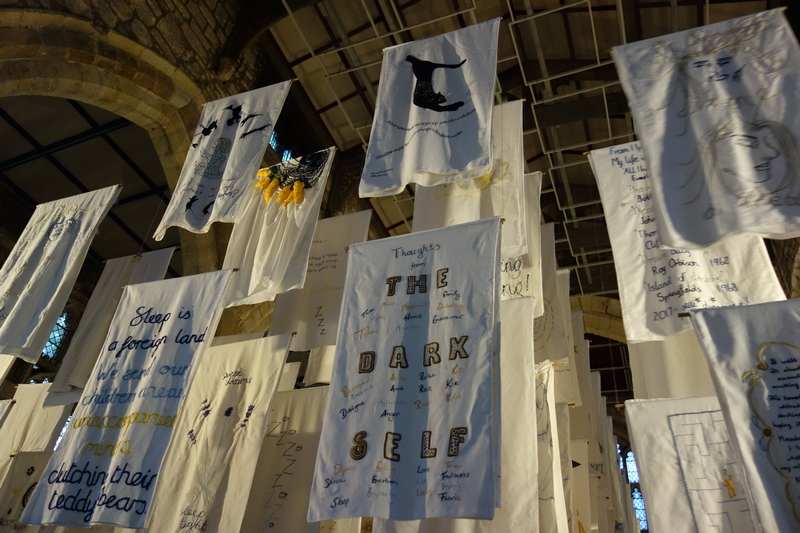 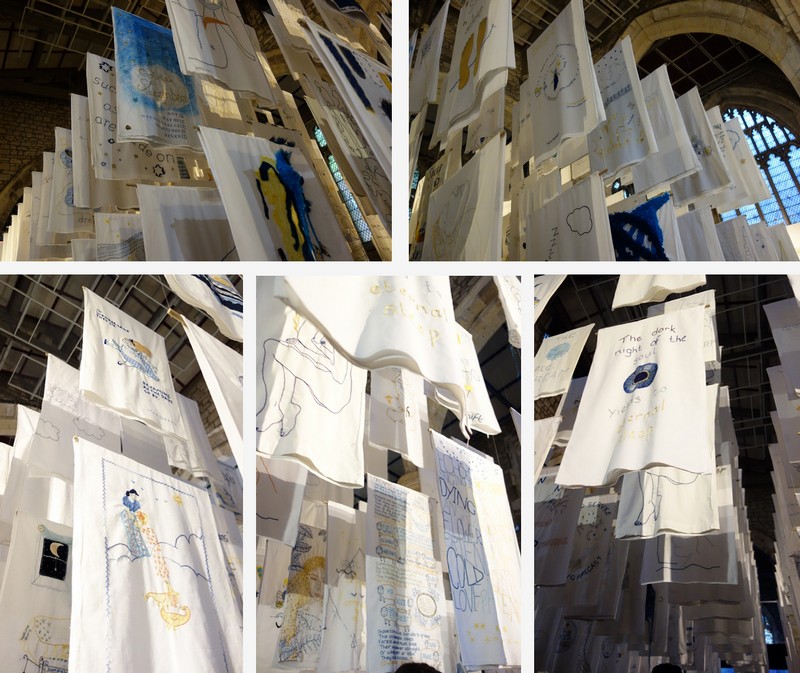 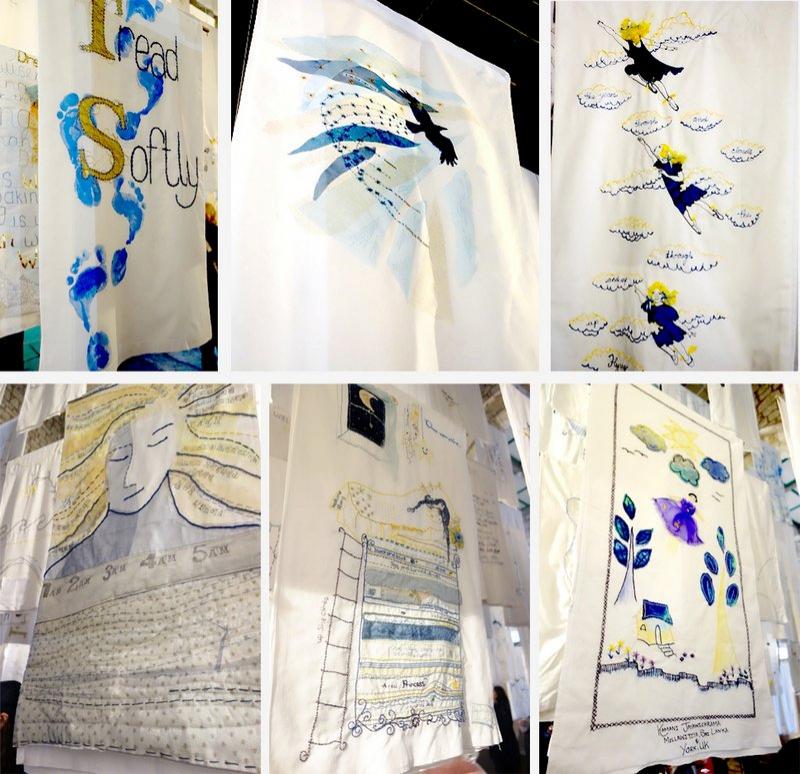 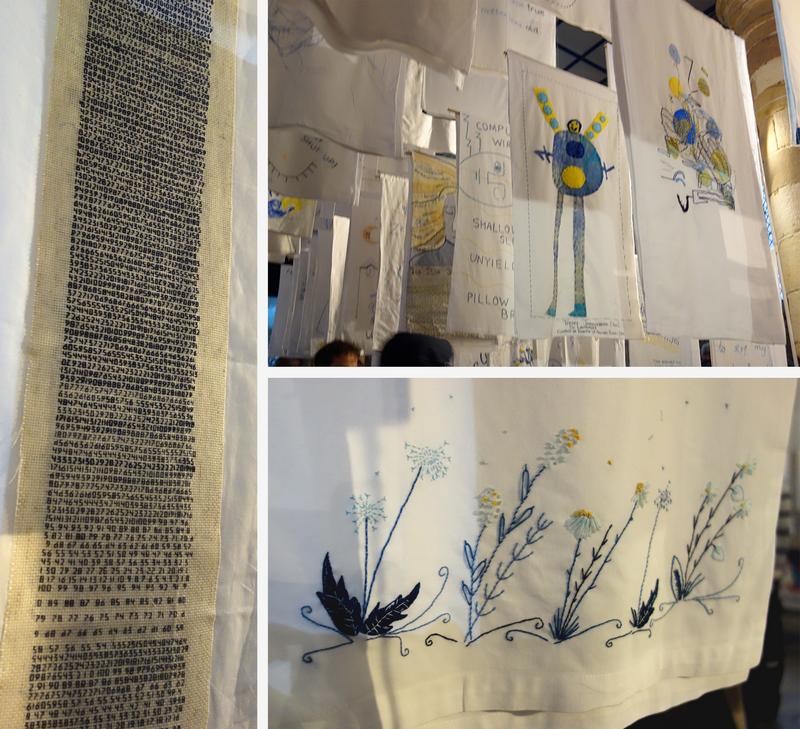 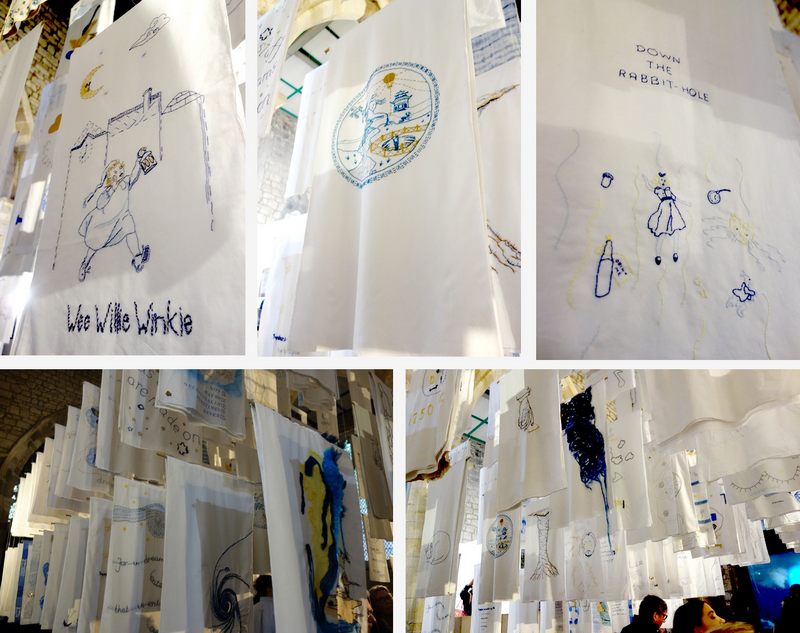 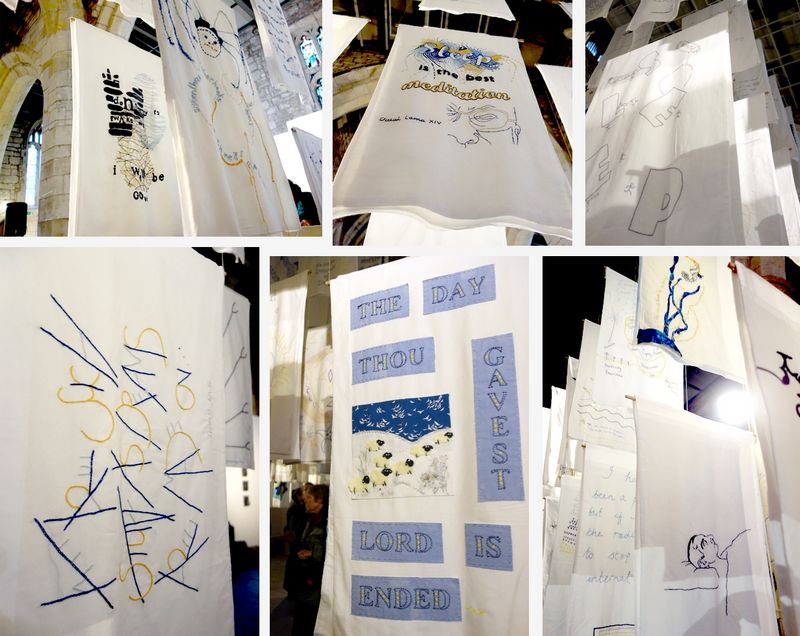 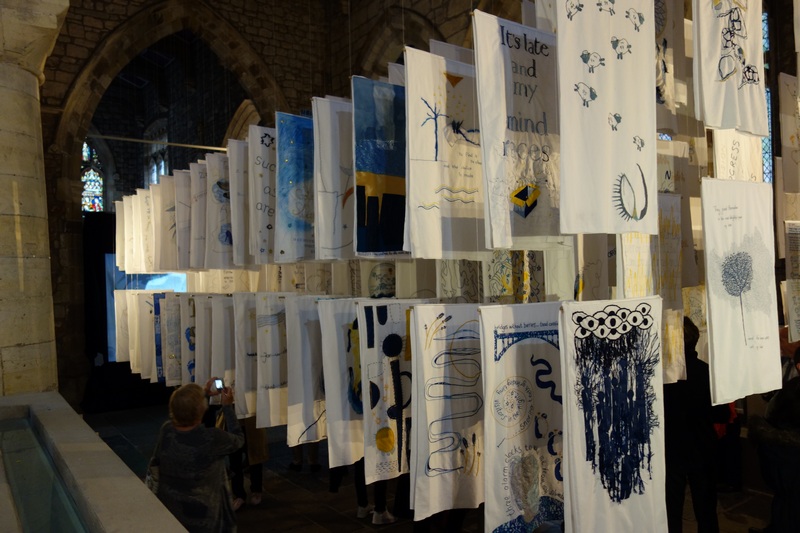 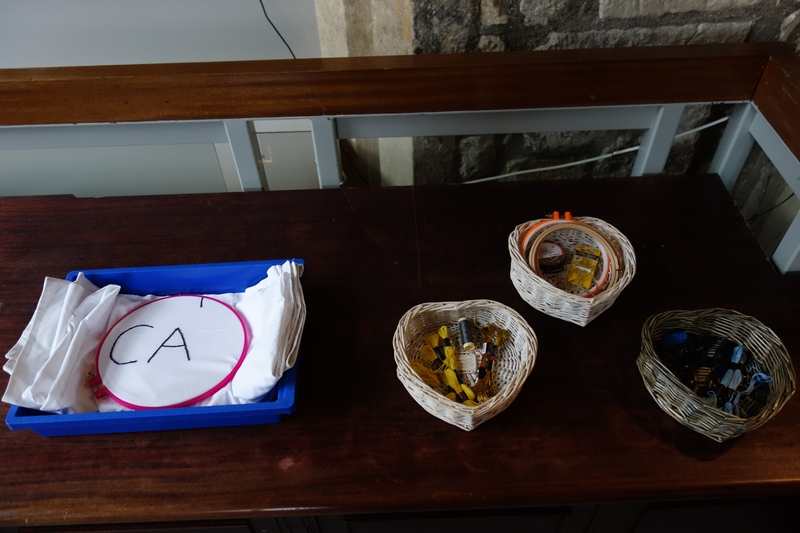 Embroidery activity at the exhibition 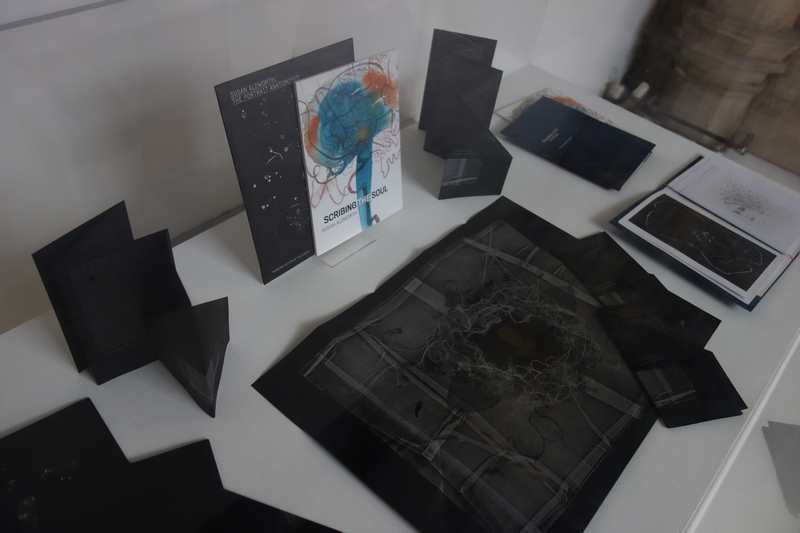 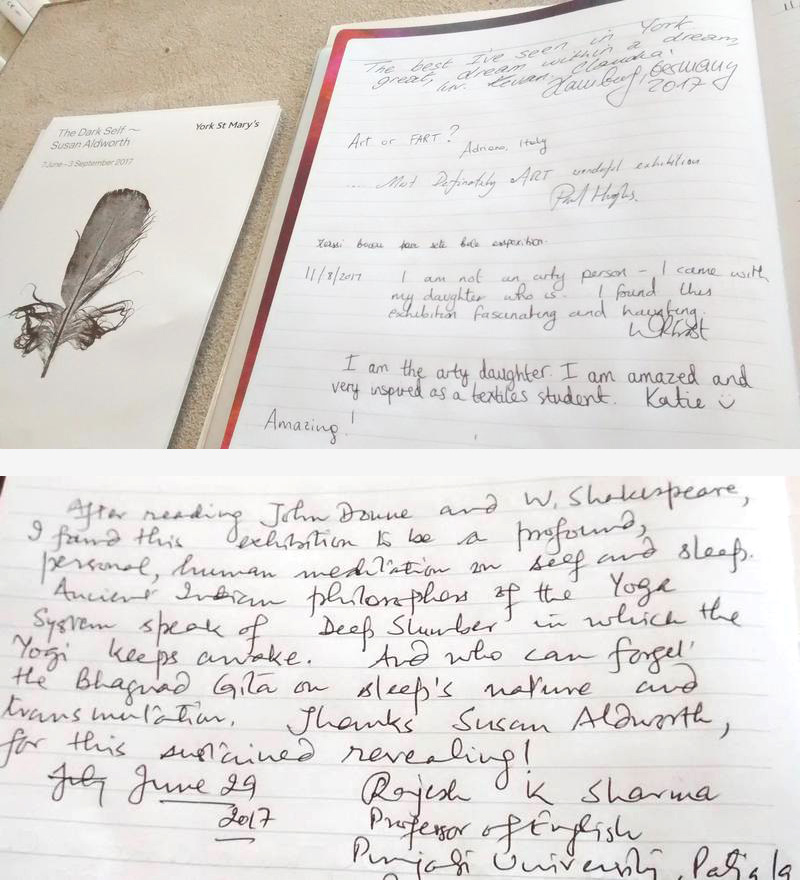 Comments in the exhibition Visitors' Book